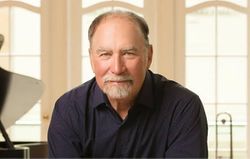 Battle Musings is not a comment on any particular war or battle. It is rather a contemplation of the tragedy and suffering caused by all wars and the seemingly inevitable cycles of violence and peace. It proceeds in reverse order from the present (war/violence), to the past (optimism/peace).

The work is in four sections. The first section -- Aftermath: Lament for the Fallen -- begins in the present (now or any period of time marked by war) and the last -- Optimism: Fanfare For Prosperity -- concludes the work in the past (prewar prosperity and optimism). The work’s four sections are performed without pause. It was premiered at the 2004 College Band Directors National Association (CBDNA) convention in Reno Nevada on March 27, 2004.

Battle Musings was commissioned and premiered by the University of Utah Wind Ensemble, at the 2004 CBDNA convention in Reno Nevada.

Dedicated to the University of Utah Wind Ensemble and Scott Hagen, conductor.