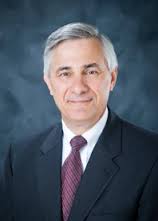 Barry Edward Kopetz (b. 19 November 1951, Morristown, N.J.) is an American composer and educator.

Dr. Kopetz received his early education in nearby Morris Plains. He developed a strong love of music, particularly church music, and began the study of trumpet at the age of nine. His family moved to Columbus, Ohio, in 1962, and there he switched to euphonium and began the serious study of music, both vocal and instrumental. He attended Walnut Ridge High School, where he studied music theory and wrote his first arrangements for band and orchestra.

Kopetz began his higher education at Ohio State University as a voice major but switched to instrumental music, studying euphonium with Paul Droste and conducting with Donald E. McGinnis. He received a Bachelor of Music Education degree in 1973. While teaching full time in Columbus public schools, he received a Master of Arts degree in 1975, also at Ohio State. He taught instrumental music in the Strasburg-Franklin (Ohio) public schools from 1974-1977 and then attended Indiana University, receiving a Doctor of Music Education degree (with distinction) in 1981.

From 1979-1983, Kopetz was assistant director of bands under Mark S. Kelly at Bowling Green State University, and then moved to Greenville, South Carolina, working as a fine arts consultant and supervising the county music program. From 1984-1986, he was a high school band director and coordinator of instrumental music in Spartanburg, South Carolina.

In 1986, he was appointed to the music faculty at the University of Minnesota. He was the Assistant Director of Bands, conducting the Symphonic Band, the Marching Band, and the Chamber Winds, and also taught band arranging and graduate wind conducting.

In addition to his original band works and arrangements, Kopetz has written numerous musicological treatises on major band works and has contributed other articles to music journals. Currently, he is working on a biography of Karl L. King. His memberships include the Music Educators National Conference, the College Band Directors National Association, the National Band Association, Phi Beta Mu and Kappa Kappa Psi.