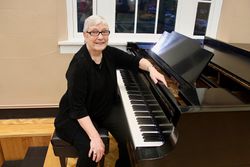 Barbara York (b. 23 February 1949, Winnipeg, Can. – 6 November 2020, Pittsburg, Ks.) was a Canadian composer, director, and accompanist living in the United States.

Barbara York worked in both Canada and the U.S. for over 40 years as a concert accompanist, choral and theatrical music director and composer. Her score and lyrics for the Canadian musical Colette won a Dora Mavor Moore Award (Canada’s version of a Tony) in 1981. She received commissions from two Canadian symphony orchestras (Mississauga and Saskatoon), the Boise State University Symphonic Winds and the Boise State Symphony Orchestra, plus numerous private groups and soloists in both the US and Canada.

She presented compositions at three World Saxophone Congresses and at the 2003 International Double Reed Symposium. Her 50-minute scripted, children’s piece, A Butterfly in Time was nominated for a Canadian “Juno Award” for recordings in 2006. Her first tuba piece, Sea Dreams, was on the required repertoire list for the International Tuba Euphonium Association’s 2004 Young Artists Competition in Budapest. In 2006, Barbara, won the Harvey Phillips Award for Euphonium in Chamber Music at the International Tuba Euphonium Congress. Her Concerto for Tuba and Orchestra was recorded by Tim Buzbee with the Iceland Symphony Orchestra.

As an accompanist, Barbara played regularly at school, university and professional concert venues throughout the United States and Canada, recorded for CBC Radio and premiered numerous works for other composers at International congresses.

Barbara lived in Pittsburg, Kansas, where she worked part-time as a staff accompanist at Pittsburg State University.