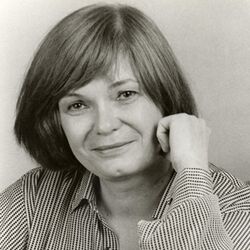 Barbara Kolb (b. 19 February 1939, Hartford, Ct.) is an American composer, clarinetist and educator.

From 1979 to 1982, Kolb served as the artistic director of contemporary music at the Third Street Music School Settlement, where she presented the "Music New to New York" concert series. Additionally, she has had a professional teaching career teaching at Rhode Island College and Eastman School of Music as a visiting professor in composition. A selection of Kolb's compositions was featured at the Kennedy Center, performed by the "Theatre Chamber Players" as part of the Boston Modern Orchestra Project.

Her music uses sound masses and often creates vertical structures through simultaneous rhythmic or melodic units (motifs or figures). Kolb's musical style can be identified by her use of colorful textures, impressionistic touch, and atonal vocabulary, with influences stemming from literary and visual arts. Her compositions include All in Good Time (1993), commissioned for the 150th Anniversary of the New York Philharmonic, and Voyants (1991), a concerto for piano and chamber orchestra dedicated to the memory of Aaron Copland.