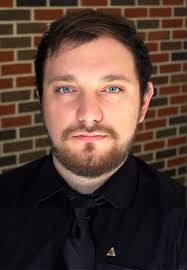 The title of this work is intentionally written in lower case: asphyxiating sky.

When I was young, I would visit my great-grandfather in hospice and he would entertain me with stories of his experiences during World War I. One story that often stands out in my mind is one of his accounts of fighting in the trenches, where they first came into contact with mustard gas being used as a weapon. Despite being mostly incoherent due to the drugs to keep him comfortable, he was incredibly lucid during his recount of the fear and helplessness of not being able to breathe.

The musical material of asphyxiating sky is based on three WWI-era songs: I Didn't Raise My Boy to Be a Soldier, The Rose of No Man's Land, and I May Be Gone for a Long, Long Time. After taking original recordings of these songs, I layered, time-stretched, and distorted them to create a sonic manifestation of a mustard gas cloud. The ensemble functions as a living, breathing cloud of sound that is unrecognizable from its source, yet spiritually connected.

asphyxiating sky seeks to recreate the physical and emotional sensations of fading memories, past fears, and the horrors that humanity has and continues to inflict on itself