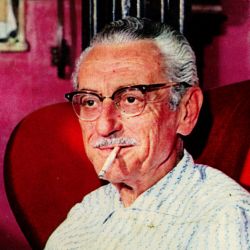 Ary Barroso (7 November 1903, Ubá, Brazil - 9 February 1964, Rio de Janeiro) was a Brazilian composer. At the age of 17, he moved to Rio de Janeiro, where he was first a pianist in dance bands. He then turned to composition, writing music for musical theater. He also worked as a radio and television programmer and announcer. He composed music for several films, including Disney’s The Three Caballeros, for which he received a from the Hollywood Academy of Cinematographic Sciences and Arts. In 1965 Barroso and Villa Lobos were awarded the National Order of Merit of the Brazilian government.

As a composer, Barroso helped establish the urban samba. He wrote over 160 of them, but none had the international impact of his Aquarela do Brasil, which was recorded in the United States as Brazil. This came to be known as Brazil’s “popular” national anthem.