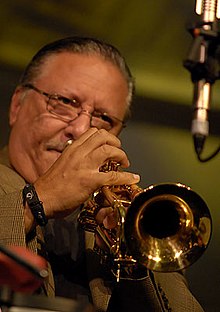 As a twelve-year-old boy in Cuba, Sandoval played trumpet with street musicians. He helped establish the Orquesta Cubana de Musica Moderna, which became the band Irakere in 1973. He toured worldwide with his own group in 1981. During the following year he toured with Dizzy Gillespie, who became his friend and mentor. From 1982 to 1984, he was voted Cuba's Best Instrumentalist and was a guest artist at the BBC and Leningrad Symphony Orchestras.

In 1989, Gillespie invited Sandoval to be part of the United Nations Orchestra. During a tour with this group, Sandoval visited the American Embassy in Athens, Greece, accompanied by Gillespie who helped him with his plan to defect from Cuba. He became an American citizen on December 7, 1998.

Sandoval has performed Latin jazz with Paquito D'Rivera, Tito Puente, and Chico O'Farrill, Cuban music in Miami, and classical music in England and Germany. In the 1990s, he was a member of the GRP All-Star Big Band. In 2014, Sandoval performed at Eastman Theatre with Zane Musa, Dave Siegel, Teymur Phel, Johnny Friday, and Armando Arce.

He has taught at Florida International University and Whitworth University, where he is in charge of its jazz ensemble. He has performed with Los Angeles Philharmonic, Pittsburgh Symphony and National Symphony Orchestras. In 1996, Sandoval was commissioned by the Kennedy Center Ballet to score Pepito's Story, a ballet based on the book by Eugene Fern and choreographed by Debbie Allen. Sandoval also composed a classical trumpet concerto that he performed and recorded with the London Symphony Orchestra.