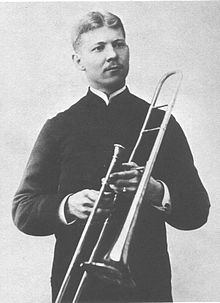 Arthur Willard Pryor (September 22, 1870, St. Joseph, Mo. – June 18, 1942, West Long Branch, N.J.) was a trombone virtuoso, bandleader, and soloist with the Sousa Band. He was a prolific composer of band music, his best known composition being The Whistler and His Dog. In later life, he was an American Democratic Party politician from New Jersey, who served on the Monmouth County, New Jersey, Board of Chosen Freeholders during the 1930s.

Pryor was born on the second floor of the Lyceum Theater in Saint Joseph, Missouri. He first took up music at a very young age and was playing the valve trombone by age 11. By age 15 he had mastered the slide trombone and was awarded a spot in his father's band. He was hailed as a prodigy after this. Shifted to another band, Pryor went on to direct the Stanley Opera Company in Denver, Colorado, until joining the John Philip Sousa Band in 1892.

He played his first solo with the Sousa Band at age 22 during the World's Columbian Exposition in Chicago in 1893. During his 12 years with the Sousa Band, Pryor estimated that he played 10,000 solos. From 1895 to 1903 Pryor was assistant conductor of the Sousa Band. After leaving the Sousa Band, he formed his own band, which made its debut at the Majestic Theatre in New York City on November 15, 1903. The Pryor Band toured until 1909, when he decided to settle down and make Asbury Park, New Jersey, the home of the band. Also at this time he became a staff conductor and arranger for the Victor Talking Machine Company in Camden, New Jersey.

He set to work on an opera titled Peter and Paul, with a libretto by L. Frank Baum, though the whereabouts of libretto or score are unknown. It was intended to star Fred Stone and David Montgomery in several roles in several time periods.

He was elected an honorary member of the Beta Tau chapter of Phi Mu Alpha Sinfonia at the University of Miami in 1940. He was a charter member of the American Bandmasters Association.

During his career, Pryor wrote some of today's most famous trombone literature, including an arrangement of the heralded Bluebells of Scotland. as well as band novelty works such as The Whistler and His Dog. with its piccolo solo, his best known composition. In 1985, thousands of early Pryor scores were discovered by conductor Rick Benjamin who has played many of Pryor's compositions with his Paragon Ragtime Orchestra.

Pryor was married to Maud Russell Pryor, and their son Roger Pryor (1901 – 1974) was also a bandleader as well as a film actor.