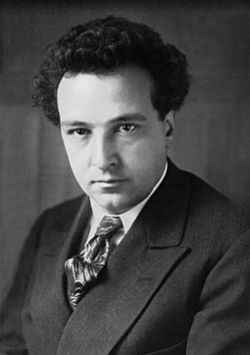 He studied at the conservatories in Zurich and Paris.

In the early 1920s, Honegger shot to fame with his "dramatic psalm" Le Roi David (King David), which is still in the choral repertoire. Between World War I and World War II, Honegger was very prolific. He composed the music for Abel Gance's epic 1927 film Napoléon. He composed nine ballets and three vocal stage works, amongst other works. One of those stage works, Jeanne d'Arc au bûcher (1935), a "dramatic oratorio" (to words by Paul Claudel), is thought of as one of his finest works. In addition to his pieces written alone, he collaborated with Jacques Ibert on both an opera, L'Aiglon (1937), and an operetta. During this period he also wrote Danse de la chèvre (1921), an essential piece of flute repertoire.

A prolific composer, he composed 13 operas and stage works, 12 ballets, incidental music, music for radio shows and films, and music for orchestra, voice, and keyboard. He also composed several works for band.

He was one of the French composers of the early twentieth century known as "Les Six" but was never in total agreement with their aims. The principal elements of Honegger's style are: Bachian counterpoint, driving rhythms, melodic amplitude, highly coloristic harmonies, an impressionistic use of orchestral sonorities, and a concern for formal architecture. His style is weightier and more solemn than that of his colleagues in Les Six. Far from reacting against German romanticism as the other members of Les Six did, Honegger's mature works show evidence of a distinct influence by it. Despite the differences in their styles, he and fellow Les Six member Darius Milhaud were close friends, having studied together at the Paris Conservatoire. Milhaud dedicated his fourth string quintet to Honegger's memory, while Francis Poulenc similarly dedicated his Clarinet Sonata.