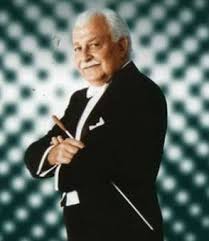 Fiedler's father was a violinist who played in the Boston Symphony Orchestra, and his mother was a pianist. He grew up in Boston, and attended Boston Latin School until his father retired in the early 1900s, and they moved to Vienna, Austria, in 1910. The family soon moved again, to Berlin, where from 1911 to 1915 young Fiedler studied violin at the Royal Academy of Music (Hochschule für Musik Berlin) under Willy Hess. Fiedler returned to Boston at the beginning of World War I. In 1915 he joined the Boston Symphony Orchestra under Karl Muck as a violinist. He also worked as a pianist, organist, and percussionist.

In 1924, Fiedler formed the Boston Sinfonietta, a chamber music orchestra composed of Boston Symphony members, and started a series of free outdoor concerts. He was appointed the eighteenth conductor of the Boston Pops Orchestra in 1930. While the position of conductor of the Boston Pops both prior to and after Fiedler tended to be a phase of a conductor's career, Fiedler made it his life's work, having the position for a half-century.

With Fiedler's direction, the Boston Pops reportedly made more recordings than any other orchestra in the world. Besides recording light classics, Fiedler also recorded music from Broadway shows and Hollywood film scores, as well as arrangements of popular music, especially the Beatles. He and the Boston Pops occasionally recorded classical works that were favorites, but not considered as "light" as most of the pieces that he conducted. Fiedler was sometimes criticized for over-popularizing music, particularly when adapting popular songs or edited portions of the classical repertoire, but he kept performances informal and sometimes self-mocking to attract a bigger audience.

Fiedler had many different hobbies. He was fascinated by the work of firefighters and would travel in his own vehicle to large fires in and around Boston at any time of the day or night to watch the firefighters at work.

Fiedler conducted at the nationally televised opening ceremonies of Walt Disney World in 1971. He also appeared on numerous telecasts on Evening at Pops, carried on PBS stations nationwide.

In 1972, Fiedler was awarded an Honorary Doctorate of Music from Berklee College of Music. On January 10, 1977, Fiedler was presented with the Presidential Medal of Freedom by President Gerald Ford.