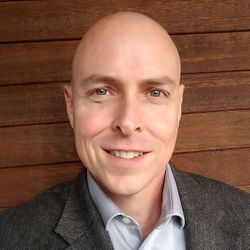 Arthur Breur (b. 1968, he/him/his/Mr.) is an American composer living in Portland, Oregon.

Arthur Breur started seriously studying piano as a child of eight after his grandmother, Jocelyn -- the second wife of his dad’s father -- passed away. The two had been close, and his weekend stays at her home inevitably included him asking her to play piano. At ten he started taking lessons, having already taught himself a variety of music, including various movie score themes and ragtime pieces. He gradually discovered that he enjoyed composing and playing his own music more than playing what was assigned to him by his piano teacher.

From the start, Breur's compositions were very affected by the music in movies and on television. He points to the music performed on such television shows as Sesame Street, The Electric Company, and The Muppet Show as sources of inspiration. Further, many excellent scores for movies of that time, such as Escape to Witch Mountain, Close Encounters, Star Wars, Raiders of the Lost Ark, Star Trek, and others, fascinated him and formed his ideas on how music should “work” -- with accessible, easily remembered themes that can be associated with specific things, people, or feelings. His music was also heavily influenced by an excellent music program at his childhood church.

By that time Breur had been studying piano for eight years, he had composed more than a dozen pieces, and had lied about his age to get into a college-level music theory course. He studied piano performance and composition and got his Bachelor of Music degree from Millikin University in Decatur, Illinois. Works by Prokofiev and Ravel in particular influenced his compositional tone considerably.

In the early 1990s, he collaborated with lyricist, comedian, and singer, Cristopher Blake. Between them they wrote more than twenty songs, many of which were performed live at various Los Angeles cabarets and open-mic nights.

Over the more than 35 years he has been composing, he has written more than 120 individual pieces, including works for five weddings, two Christmas revues, numerous videos, and one short film, Leah (2008).