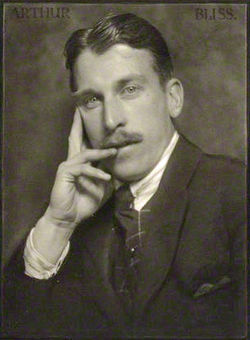 Bliss studied at Pembroke College and at the Royal College of Music with Ralph Vaughan Williams and Gustav Holst. During World War I, he served with the British Army, and was wounded in 1916. He returned to England after the war, resuming his music studies and producing several works that established his reputation as a composer.

Bliss came to the United States and taught in California from 1923-1925. After returning to England, he composed the score to the film Things to Come. From 1942-1944, he was music director of the British Broadcasting Company. He was knighted in 1950 and succeeded Arnold Bax as Master of the King's Musick in 1953.

In Bliss's later years, his work was respected but was thought old-fashioned, and it was eclipsed by the music of younger colleagues such as William Walton and Benjamin Britten. Since his death, his compositions have been well represented on record, and many of his better-known works remain in the repertoire of British orchestras.