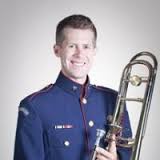 It is a tradition for military bands in the United States to perform a medley of the service songs of the U.S. Armed Forces. Each service has its own version of this medley, and during performances audience members who have served (or whose family members have served) will stand and sing when their service’s song is played. The Armed Forces Medley is the Coast Guard Band’s version of this tradition, and was reworked into its current version by MUC Sean Nelson in 2016. MUC Nelson’s goal was to create a new rendition that is more accessible and memorable to audiences by closely matching each service’s official version of their respective songs.

Each military band usually organizes its armed forces medley around its own service, and the Coast Guard’s medley is no different. MUC Nelson chose to begin with a quote from the opening measures of Semper Paratus, the Coast Guard’s official marching song. The Army Goes Rolling Along follows, then the Marines’ Hymn. Following the Marines’ Hymn is Anchors Aweigh, which is the fight song of the Naval Academy and the march of the United States Navy, and then The U.S. Air Force, sometimes known as "Off We Go," the official song of the United States Air Force. The Armed Forces Medley reaches its climax with a full chorus of Semper Paratus, and an original ending by MUC Nelson brings it to a proud and inspiring close.