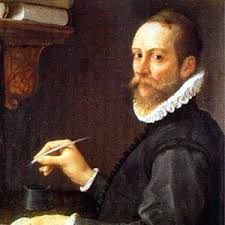 Aria della Battaglia, a title that translates literally as "song of the battle," is the kind of descriptive work that was very much in vogue during the sixteenth century. Many Renaissance composers were seeking to capitalize on the success of Clement Janequin's celebrated La Guerre, a 1520 vocal work that depicted the Battle of Marignano in music and text. Although Andrea Gabrieli did not frequently compose in this genre, he was accomplished in the descriptive technique, providing musical representations of battle sounds such as martial fanfares, explosions, horse hooves, and the back and forth "dialogue" of opposing sides. Unlike Janequin, Andrea had no text upon which he could rely to convery the concept of war, and his ability to suggest imagery through instrumental techniques alone makes Aria della Battaglia the forerunner of later musical military scenarios such as Ludwig van Beethoven's Wellington's Victory and Peter I Tchaikovsky's 1812 Overture.

The Aria della Battaglia, per sonar d’instrument! a fiato, was composed probably between 1570 and 1580. Edited by Ghedini for modern wind instruments, it was first performed at La Scala in Milan under the direction of Guido Cantelli on September 23, 1952. Mr. Cantelli likewise introduced this work at a concert of the Philharmonic-Symphony Society of New York on March 26, 1953.

Herbert F. Peyser, in the New York program, stated that “the Ghedini version has been published by Ricordi and was edited by Ghedini for the ‘Settimana Musicale’ of the Academia Chigiana of Siena. There the manuscript has been lost and Ghedini has been compelled to write a new version.”

The instrumentation of Ghedini calls for 3 flutes and piccolo, 2 oboes and English horn, 3 clarinets and bass clarinet, 3 bassoons, 4 horns, 3 trumpets, 3 trombones and tuba.

The work is subtitled per sonare d'instrumenti da fiato (to be played by wind instruments).