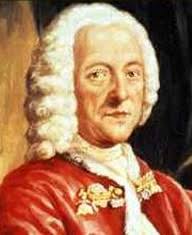 An aria is a self-contained composition for solo voice, usually with an instrumental accompaniment and occurring within the context of a larger form such as opera, oratorio or cantata.

This setting of Telemann's Aria was published in 2003 by Larry Daehn, with thanks to Pierre La Plante and Thomas Stone for their creative assistance in locating and arranging the song. The aria is in rondo form and employs compositional transitional style elements from the late Baroque to the early Classical Periods.