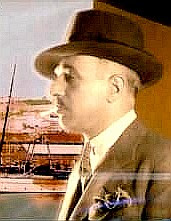 April in Portugal is a popular song, also named "The Whisp'ring Serenade." The music was written by Raul Ferrão with Portuguese lyrics by José Galhardo as a fado named Coimbra, about the city of that name, in 1947. English lyrics written by Jimmy Kennedy were set to the music, though many of the most popular versions of the song were instrumentals. It is one of the signature songs of Portuguese singer and fadista Amália Rodrigues. It was also recorded in French by the tenor Luís Piçarra.