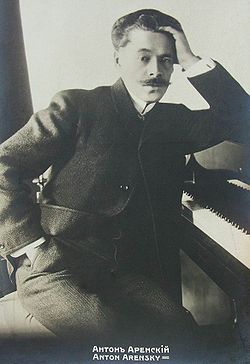 In 1895 Arensky returned to Saint Petersburg as the director of the Imperial Choir, a post for which he had been recommended by Mily Balakirev. Arensky retired from this position in 1901, spending his remaining time as a pianist, conductor, and composer.

Pyotr Ilyich Tchaikovsky was the greatest influence on Arensky's musical compositions. Indeed, Rimsky-Korsakov said, "In his youth Arensky did not escape some influence from me; later the influence came from Tchaikovsky. He will quickly be forgotten." The perception that he lacked a distinctive personal style contributed to long-term neglect of his music, though in recent years a large number of his compositions have been recorded. Especially popular are the Variations on a Theme of Tchaikovsky for string orchestra, Op. 35a - arranged from the slow movement of Arensky's 2nd string quartet, and based on one of Tchaikovsky's Songs for Children, Op. 54. Arensky was perhaps at his best in chamber music, in which genre he wrote two string quartets, two piano trios, and a piano quintet.