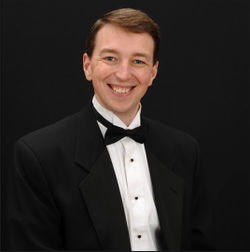 He has served as choral director at West Genesee High School, Camillus, N.Y., since 2000. He is also music minister at Holy Family Church, Syracuse, New York. While under his direction, Anthony’s Chorale has been selected to perform for the NYSSMA Winter Conference multiple times. His choirs have received top ratings as they perform across the country, on the radio, on television, and on CD. Anthony has been the guest conductor for the Onondaga County Honors Choir with the Syracuse Symphony Orchestra for Pops Series holiday concerts. He has conducted and chaired festivals in New York State.