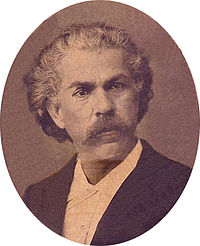 Gomes's father was the local bandmaster and with his help, Gomes studied several instruments. At the age of 15, he began to compose some small works, some of which were included on his father's band concerts. He studied at the Rio de Janiero Conservatory. In 1860, two of his cantatas attracted attention. n. The local success of these works prompted the Brazilian Emperor Don Pedro II to sponsor Gomes’ attendance at the Milan Conservatory in Italy in 1864, where he studied composition with Lauro Rossi. He made a hit there in 1867 with two musical comedies. He was the first New World composer whose work was accepted by Europe.

His best known work, the opera Il Guarany, was introduced in Milan in 1870. It was acclaimed in Genoa, Florence, and Rome, as well as in his native Brazil. After the production of Salvatore Rosa and Maria Tudor in 1879, Gomes returned to Brazil to an overwhelming reception. Although Brazilian, Gomes's musical style is that of the Italian opera and not characteristic of Brazilian nationalistic music. Besides his eight operas, he composed songs (three books), choruses, and piano pieces.