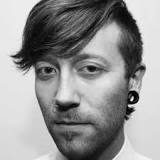 Simon Dobson's 2014 Another World's Hell was inspired by Chapter 5 of Huxley's Brave New World, where the protagonists attend a concert "at the newly opened Westminster Abbey Cabaret and listen to Calvin Stopes and his sixteen Sexophonists." Dobson decided to write the "future music" himself, and it was a fascinating, well-composed piece that transitioned smoothly from one wildly different episode to another.

Dobson’s Another World’s Hell has already reached the status of having a lasting appeal. The piece is inspired by Aldous Huxley’s detailed description of music in his 1932 novel Brave New World and was composed for a major brass and wind festival in Switzerland in 2013.

With Dobson conducting and the San Francisco Wind Ensemble in top form, Saturday’s U.S. premiere shows Dobson’s knack for colorful and refined instrumentation, rhythmic and harmonic inventiveness, and his ability to create a transparent orchestral sound throughout — both when using intimate musical gestures and when pulling out all the stops.