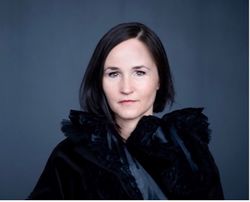 Anna Thorvaldsdottir (b. 1977) is an Icelandic composer.

Dr. Thorvaldsdottir holds a Ph.D. (2011) from the University of California in San Diego. She is currently based in the London area and is composer-in-residence at the Iceland Symphony Orchestra.

Her music is composed as much by sounds and nuances as by harmonies and lyrical material. It is written as an ecosystem of sounds, where materials continuously grow in and out of each other, often inspired in an important way by nature and its many qualities, in particular structural ones, like proportion and flow.

Thorvaldsdottir's music is widely performed internationally and has been commissioned by many of the world's leading orchestras, ensembles, and arts organizations, such as the Berlin Philharmonic, New York Philharmonic, City of Birmingham Symphony Orchestra, Gothenburg Symphony Orchestra, International Contemporary Ensemble, Ensemble Intercontemporain, and Carnegie Hall.

Portrait concerts with Anna's music have been featured at several major venues and music festivals, including Lincoln Center's Mostly Mozart Festival in NYC, and the Composer Portraits Series at NYC's Miller Theatre.

Anna regularly teaches and gives presentations on composition, in academic settings, as part of residencies, and in private lessons. Invited lectures and presentations include Stanford, Columbia, Cornell, NYU, Northwestern, Sibelius Academy, and the Royal Academy of Music in London.