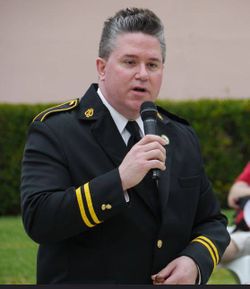 As a sophomore in high school, Mr. Glover's first band arrangement was performed by the school’s wind ensemble, and thus began a multi-decade career in composition and arranging. His band works number over 200, many are published by Barnhouse, and have been performed, recorded, and broadcast by bands worldwide.

Mr. Glover graduated from Central Methodist College (now university) in 1983 with a Bachelor of Music Education degree, did graduate work at Southeast Missouri State University. In college, Glover won a position in the Detroit Concert Band, conducted by Leonard B. Smith, and performed for four seasons on euphonium. He participated in numerous recording sessions with the DCB, including ten phonograph records of “Gems of the Concert Band” and a documentary film soundtrack. For many years he also performed as a soloist and guest artist.

After seven years as director of bands at Rosary High School in St. Louis, in 1998, Mr. Glover joined the staff of the C.L. Barnhouse Company in Oskaloosa, Iowa, where he serves as staff composer/arranger, Chief Operating officer, and Secretary-Treasurer. In addition to Glover’s original works for band, he has composed numerous instrumental solos and choral pieces. He has arranged or transcribed over 175 works for band.

An enthusiast of, and advocate for classic concert band music and history, Glover is not only involved in new music production at Barnhouse, but also oversees the company's 127+ year archive of publications and historical memorabilia, and is frequently involved in band history research projects. He is a member of ASCAP; Association of Concert Bands, where he serves on the advisory council; is president of the Detroit Concert Band, Inc.; and is conductor of the Windjammers, Unlimited Education Band. In May 2013 he received the Distinguished Alumni award from Central Methodist University.