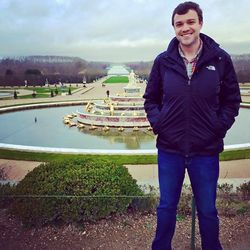 Andrew graduated with honors as a NC Teaching Fellow, Sudler Trophy winner, and Instrumental Performer of the Year from Western Carolina University in 2010 with a BSEd in Music Education. Prior to his appointment at UGA, Mr. Blair taught on the middle, high school, and collegiate levels for eight years in North Carolina, with his ensembles earning consistent Superior ratings in grades 1-6 in concert, marching, and solo and ensemble performance assessments across the Southeast.

Other honors include serving as an assistant conductor with the Charlotte Youth Wind Ensembles from 2015-2018, being named a finalist for Teacher of the Year at both Hickory Ridge Middle School and Harris Road Middle School as well as the NC South-Central Band Directors Association Young Director Award. Andrew earned a Citation of Excellence from Cabarrus County Schools and was the 2016 recipient of the American School Band Directors Association Encore Award for Young Band Directors. Andrew holds memberships in NAfME and the Percussive Arts Society and has also been an educational artist and clinician for Innovative Percussion since 2010.

As a performer, Andrew has most recently held positions as a section percussionist in the Union Symphony Orchestra (NC), as well as principal percussionist of the Carolinas Wind Orchestra (SC).

As an arranger and sound designer, Andrew’s music for high school and collegiate marching band has been performed all across the United States, ranging from small, non-competitive ensembles, up to South Carolina and Texas State Finalists as well as NCAA Division I and II Athletic Bands.