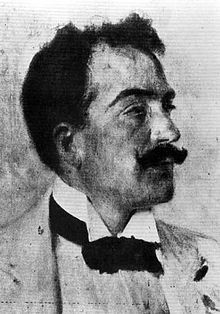 The opera Andrea Chenier was first produced at La Scala Theatre in Milan on March 28, 1896. The first American performance was given at the Academy of Music in New York City in November of the same year; the first Metropolitan Opera showing was on March 7, 1920. At least two band arrangements of excerpts from the opera have been in United States since the turn of the century -- Arthur Pryor and the Sousa Band recorded the 1902 arrangement by Giuseppe Vaninetti in 1903. J J Richards’ arrangement (1951) has been widely used since its publication.

The libretto of Andrea Chenier is based on the life of French poet André Chénier (1762-1794). Though sympathetic to the ideals of the French Revolution, Chénier openly denounced the violence of the radical Jacobins and was consequently imprisoned and sentenced to death by Robespierre on the basis of a fraudulent treason charge.

The music in this selection begins at a ball given by the Countess de Coigny. Her daughter Madeleine is deeply attracted to Chénier and begs him to improvise a poem decrying the servitude of the poor. Chénier had originally been an ardent supporter of the French Revolution but, alarmed by its excesses, had attacked the leaders and was now denounced as a traitor and sentenced to die. Madeleine attempts to persuade the Revolutionary Tribunal to take her life instead of her lover's but is refused. Finally, she bribes a jailer to substitute her name on the death list for that of another woman, and she might die with him. The work closes as they make their way together across the courtyard of St. Lazare prison to the guillotine.