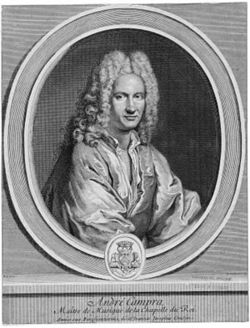 Campra was the son of Jean-François Campra, a surgeon and violinist from Graglia, Italy, and Louise Fabry, from Aix-en-Provence. His father was his first music teacher. He became a choirboy in the Cathédrale Saint-Sauveur in Aix in 1674 and commenced ecclesiastical studies four years later. He was reprimanded by his superiors in 1681 for having taken part in theatrical performances without permission, but was nevertheless made a chaplain on 27 May of that year.

Campra was one of the leading French opera composers in the period between Jean-Baptiste Lully and Jean-Philippe Rameau. He wrote several tragédies en musique and opéra-ballets that were extremely well received. He also wrote three books of cantatas as well as religious music, including a requiem.

He served as maître de musique (music director) at the cathedrals of Arles and Toulouse and then, from 1694 to 1700, served in a similar capacity at the cathedral of Notre-Dame de Paris. Campra added violins to the performance of sacred music at the Paris cathedral, a controversial innovation in an era when they were considered street instruments. He began to compose for the theatre in 1697 and published some theatrical compositions under his brother's name to protect his reputation with church authorities. In 1700 he gave up his post at Notre-Dame and devoted himself to theatrical music with critical success. By 1705 he was such a musical celebrity that he became a target for negative articles in the press. In 1720, he adopted the composition of sacred music as his only profession.

Although Campra had obtained critical success he lacked financial security. In 1722 he was engaged briefly as maître de musique by the Prince of Conti. After the death of the regent Philippe d'Orléans in December 1723, Campra became sous-maître at the Royal Chapel in Versailles. In 1730 he became the Inspecteur Général at the Opéra (Royal Academy of Music).