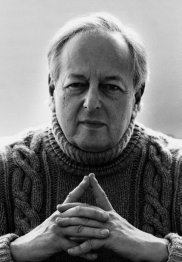 André George Previn (6 April 1929, Berlin, Germany - 28 February 2019, New York, N.Y.) is a German-American pianist, conductor, and composer. He is considered one of the most versatile musicians in the world and is the winner of four Academy Awards for his film work and ten Grammy Awards for his recordings (and one more for his Lifetime Achievement).

Previn was born in Berlin, Germany, the son of Charlotte (née Epstein) and Jack Previn, who was a lawyer, judge, and music teacher. In 1939, his family, being Jewish, had to leave Nazi Germany and moved to Los Angeles, where his great-uncle, Charles Previn, was music director of Universal Studios. André grew up in Los Angeles and became a naturalized citizen of the United States in 1943. He first came to prominence by arranging and composing Hollywood film scores in 1948.

In 1951 and 1952, while stationed at the Presidio of San Francisco during his military service, Previn took private conducting lessons from Pierre Monteux, which he valued highly. In the mid-to-late 1950s, and more recently, Previn toured and recorded as a jazz pianist. In the 1950s, mainly recording for Contemporary Records, he worked with J.J. Johnson, Shelly Manne, Leroy Vinnegar, Benny Carter, and others. An album he recorded with Manne and Vinnegar of songs from My Fair Lady was a best-seller. As a solo jazz pianist, Previn largely devoted himself to interpreting the works of major songwriters such as Jerome Kern (recorded in 1959), Frederick Loewe, Vernon Duke (recorded in 1958), and Harold Arlen (recorded in 1960). Previn made two albums with Dinah Shore as arranger, conductor, and accompanist in 1960, and another, Duet, with Doris Day in 1961. He made appearances on The Ford Show, Starring Tennessee Ernie Ford as well as The Dinah Shore Chevy Show. He collaborated with Julie Andrews on a collection of Christmas carols in 1966, focusing on rarely heard carols. His main influences as a jazz pianist include Art Tatum, Hank Jones, Oscar Peterson, and Horace Silver. Previn's more recent work also shows the influence of Bill Evans. Previn has recorded solo classical piano compositions by Mozart, Gershwin, Poulenc, Shostakovich, an album for RCA Victor with violinist Erick Friedman of the Franck and Debussy violin sonatas, and many chamber works for piano.

Previn has received a total of thirteen Academy Award nominations, winning in 1958, 1959, 1963 and 1964. He is one of few composers to accomplish the feat of winning back-to-back Oscars, and one of only two to do so on two occasions (the other being Alfred Newman). In 1970 he was nominated for a Tony Award as part of Coco's nomination for Best Musical. In 1977 he became an Honorary Member of the Royal Academy of Music. The 1977 television show Previn and the Pittsburgh was nominated for three Emmy awards. Previn was appointed an honorary Knight Commander of the Order of the British Empire in 1996. Previn received the Kennedy Center Honors in 1998 in recognition of his contributions to classical music and opera in the United States. In 2005 he was awarded the international Glenn Gould Prize and in 2008 won Gramophone magazine's Lifetime Achievement Award for his work in classical, film, and jazz music. In 2010, the Recording Academy honored Previn with a Lifetime Achievement Grammy.