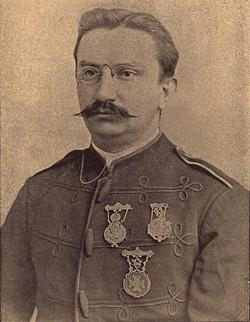 Anchors Aweigh is the fight song of the United States Naval Academy, and as a result, the song is strongly associated with the United States Navy. It was composed in 1906 by Charles A. Zimmerman with lyrics by Alfred Hart Miles. When he composed Anchors Aweigh, Zimmerman was a lieutenant and had been bandmaster of the United States Naval Academy Band since 1887. Miles was Midshipman First Class at the Academy, in the class of 1907, and asked Zimmerman to assist him in composing a song for that class, to be used as a football march. Another Academy Midshipman, Royal Lovell (class of 1926) later wrote what would be adopted into the song as its third verse.