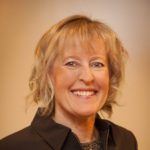 Amy Riebs Mills (b. 1955) is an American composer and conductor.

Dr. Mills holds a doctorate in conducting from Catholic University, and bachelor’s and master’s degrees in music from Northwestern University, where she was the School of Music’s 1995 commencement speaker. She continued her studies at the Conductors’ Institute, Tanglewood, and the Oregon Bach Festival, studying with Gustav Meier, Harold Farberman, Daniel Lewis, and Helmut Rilling.

Dr. Mills founded and served as music director of the National Women’s Symphony in Washington, D.C., a professional orchestra featuring the music of women composers along with recognized masters. After founding this ensemble in 1992, she performed world and American premieres of works by Libby Larsen, Pulitzer Prize winner Melinda Wagner, Jennifer Higdon and Augusta Read Thomas. The orchestra also collaborated with the Norwegian and Canadian embassies in presenting American premieres of women composers of their countries.

Complementing a successful conducting career that has spanned over four decades, Amy Riebs Mills is increasingly in demand as a composer, writing in all genres, including orchestra and band, winds and strings, voice, chorus and piano.

Under the baton of Maestro Harvey Felder, her Christmas Angels and Bells was premiered by the Tacoma Symphony in 2012, and orchestras around the U.S. have performed her pops arrangements. Chicago’s Sapphire Woodwind Quintet premiered New Dancing Shoes, Suite for Woodwind Quintet in 2015. And Shelley Waite premiered Advent Trilogy (Three Men of Christmas) in Morristown, Tennessee, in 2015.

Megumi Kanda, principal trombonist of the Milwaukee Symphony, commissioned and premiered Dr. Mills’ virtuoso piece for trombone, Red Dragonfly, at the 2013 International Trombone Festival. And in 2015 Ms. Kanda premiered the band version at the American Trombone Workshop with the U.S. Army Band. Kanda has also commissioned Mills to write a new virtuoso piece, Golden, will be premiered at the International Trombone Festival in 2021.

Dr. Mills has served on the faculty of the Conductors’ Institute at Bard College and frequently serves as an adjudicator and clinician.