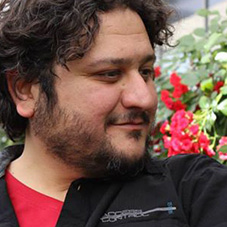 Amir Molookpour (b. Iran) is an Iranian composer.

Mr. Molookpour began to study the traditional Persian music at the age of nine. After some years he began to study the Western music as an autodidact and since 1994 followed specialization classes with Hassan Riahi, the composer of the last Iranian national anthem. In 1995 he began to collaborate with the symphony orchestra of the Iranian radio and television as a composer and arranger, writing several pieces for symphonic and chamber orchestra, including a Fantasy for Tar and Orchestra and the Short Suite for small orchestra, which was elected as one of the best composition of the Iranian National Radio in 1999. He was one of the first members and co-founders of the Association of Young Iranians Composers who has had a considerable success at national level.

In 2001 Molookpour moved to Italy to study Musicology at the University of Pavia (in Cremona) continuing to work with the symphony orchestra of the Iranian Radio as a composer. He did research on the role and functions of music in the religious rituals of the Zoroastrians of Iran, which later became the subject of his thesis in the Faculty of Musicology in Cremona.