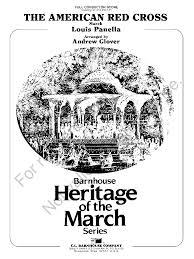 This work was written during World War I, a time when Americans, as well as other nations, were deeply grateful for the humanitarian work performed by the Red Cross. The International Red Cross was established at a convention in Geneva in 1864, largely through the efforts of J.H. Dunant, a Swiss. The organization's symbol, a red cross on a white background, has been prominent during public health campaigns and periods of disaster ever since that time. The American society (one of eighty-eight) was organization by Clara Barton in 1881. The organization is supported entirely by voluntary contributions.