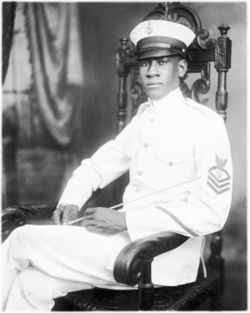 Adams began the study of music at the age of nine. Since there were no music teachers in the area at the time, he taught himself to play the clarinet, cornet, and trombone. He received a music diploma from the University of Chicago through correspondence courses.

At the age of 14, Adams began teaching and soon organized his own orchestra. He helped organize, and became the assistant conductor of, the Municipal Band of St. Thomas. In 1910 he organized and taught a juvenile band of students aged 8-18. This band became so proficient that the United States government sought and gained permission to enlist it in the military service. Scheduled to be stationed in the Virgin Islands, the band volunteered for service in the war zone during World War I. Adams enlisted in the U.S. Navy in 1917 and was the navy's first black bandmaster. He served in World War I and World War II, and made several concert tours of the United States with his band, including performances at the White House. He also was a frequent guest conductor of the Goldman Band in New York, at the invitation of Edwin Franko Goldman.

He was associated with radio in several ways. One of his band pieces, the Virgin Islands March, was used daily as the signature theme for all news broadcasts. For several years, he presented a twice-daily program of classical music.

Adams retired from the navy in 1947 and died in St. Thomas on November 24, 1987. Most of his music library, which included numerous unpublished band works, was destroyed in a fire.