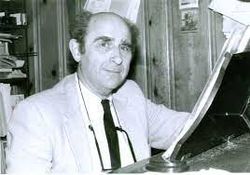 Blank's early musical training was on the violin. He attended the High School of Music & Art where an interest in conducting and composition was fostered. Further studies were at the Juilliard School of Music (1945-1947), Washington Square College (BA, 1948), University of Minnesota (MA,1950) and the University of Iowa.

He was a violinist in the Pittsburgh Symphony Orchestra (1950–52). He taught composition at Western Illinois University (1966–68), Paterson State Teachers College (1968–70), Lehman College (1970–77), and at Virginia Commonwealth University (1978–96), where he became a professor emeritus. In 1990 he was awarded a grant from the Virginia Commission for the Arts to commission his Concerto for Clarinet and String Orchestra.

In 1985 he received a commission from the New York State Council on the Arts' Presenting Organization to compose Quintet for Clarinet and String Quartet for the Roxbury Chamber Players. Other awards mentioned in his University of Akron Bierce Library Archives composer profile are: First Prize in the George Eastman Competition (1985) sponsored by the Eastman School of Music for his Duo for Bassoon & Piano, and a grant (1985) from the National Endowment for the Arts to support his one-act opera, The Magic Bonbons. The Virginia Shakespeare Festival at Williamsburg commissioned Blank to write music for their production of Measure for Measure.