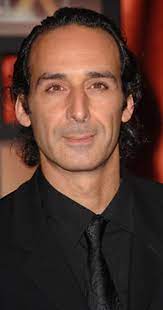 Desplat began playing the piano at the age of five. He later picked up the trumpet, before switching to flute at nine. Desplat's musical interests were wide, ranging from French composers as Maurice Ravel and Claude Debussy, to jazz and world music. He developed an early appreciation for film music, courtesy of the movie soundtracks his parents brought back from the United States. He began collecting Bernard Herrmann's Hitchcock soundtracks as a teen, and eventually decided to pursue a career as a film composer after hearing John Williams's Star Wars score in 1977.

Desplat studied at the Conservatoire de Paris under Claude Ballif. During this period, he also took a summer course under Iannis Xenakis. Desplat also studied under Jack Hayes in Los Angeles. After leaving the Conservatoire, the then 20-year-old Desplat joined a theatrical troupe, where he wrote and played music.

Desplat has worked on many films since the 1980s, and his big Hollywood break came in 2003 with the soundtrack for the film Girl with a Pearl Earring, a drama set in 17th-century Delft and exploring a fictional muse of Vermeer. He has composed scores for a wide range of films, including low-budget independent productions and large-scale blockbusters, such as The Queen, The Golden Compass, The Curious Case of Benjamin Button, The Twilight Saga: New Moon, Fantastic Mr. Fox, Harry Potter and the Deathly Hallows – Part 1 & Part 2, Little Women, The King's Speech, The Danish Girl, The Imitation Game, Moonrise Kingdom, Argo, Rise of the Guardians, Zero Dark Thirty, The Midnight Sky, Godzilla, Unbroken, The Secret Life of Pets, and Isle of Dogs.