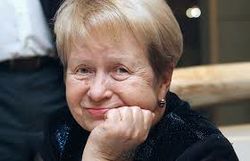 Aleksandra Nikolayevna Pakhmutova (b. 9 November 1929, Beketovka, Russia) is a Soviet and Russian composer.

Pakhmutova began playing the piano and composing music at an early age. She was admitted to the prestigious Moscow Conservatory and graduated in 1953. In 1956 she completed a post-graduate course led by the outstanding composer Vissarion Shebalin.

Her career is notable for her success in a range of different genres. She has composed pieces for the symphony orchestra (The Russian Suite, the concerto for the trumpet and the orchestra, the Youth Overture, the concerto for the orchestra); the ballet Illumination; music for children (cantatas, a series of choir pieces, and numerous songs); and songs and music for over a dozen different movies from Out of This World in 1958 to Because of Mama in 2001.

She is best known for some of her 400 songs, including such enduringly popular songs as The Melody, Russian Waltz, and Good-Bye Moscow, which was used as the farewell tune of the 22nd Olympic Games in Moscow in 1980. Her husband, the eminent Soviet era poet Nikolai Dobronravov, contributed lyrics to her music on occasion, including songs used in three films. One of her most famous ballads is Belovezhskaya Pushcha, composed in 1975, which celebrates Bialowieza Primaeval Forest, a last remnant of the European wildwood split now between Poland and Belarus. Another much-aired song was Malaya Zemlya, about a minor outpost where the then Soviet leader Leonid Brezhnev served as a political commissar during World War II.

Pakhmutova has remained one of the best known figures in Soviet and later Russian popular music since she first achieved fame in her homeland in the 1960s. She found favour with the state establishment as well as the public. Reputedly Brezhnev's favourite composer, she received several government awards and state prizes and served as the Secretary of the USSR and Russian Unions of Composers. She was named Hero of Socialist Labour in 1990. Her name was given to Asteroid # 1889, registered by the planetary centre in Cincinnati, Ohio, United States.