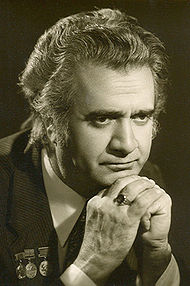 He studied composition at the Komitas Conservatory in Yerevan, Armenia, and was at the Moscow Conservatory with Ilya Litinsky, Nikolai Ivanovich Peyko, and Viktor Zuckermann. He was music director of the Armenian Philharmonic (1954-1990) and taught at the Yerevan Conservatory beginning in 1965. His compositions include concerti for flute, oboe, piano, trumpet, trombone, tuba, and violin as well as an opera, a requiem and various film scores.