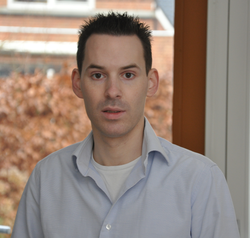 Alex Poelman (b. 18 September 1981, Arnhem, Netherlands) is a Dutch composer and hornist.

Poelman began the study of French horn at the age of 11 with members of the Oosterbeek Royal Band. After six years of high school Alex moves to Enschede to study computer science at the University of Twente. As a horn player he is active in the Student Wind Orchestra Twente and the National Youth Wind Orchestra of the Netherlands. He is currently playing in the Wind Orchestra of Wilhelmina Glanerbrug, one of the best amateur orchestras of the Netherlands. This orchestra has premiered his first symphony, second symphony and Jeanne d’Arc. During his study he started composing music for small ensembles and arranging a few pieces for wind band.

Volcano was Alex's first composition for wind band in 2001. His third piece, The Seven Wonders of the Ancient World, his first symphony (2004), became a great success and is performed all over the world. After his first symphony, compositions like D-Day, Jeanne d’Arc, Pinocchio and Theophoros followed. In 2015 his second symphony The Odyssey, a 45-minute composition for choir and wind band, is premiered by the National Opera and Concert Choir of the Netherlands and Wilhelmina Glanerbrug. Compositions of Alex Poelman are commissioned by various orchestras, and he has visited Japan, United States, Brazil and Europe.