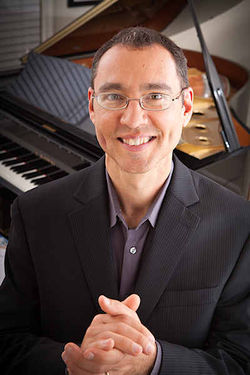 Alan Baylock is quickly becoming recognized as one of the most creative young voices in the music business today. He is in demand as a composer, arranger, conductor, producer, instrumentalist, educator, and is the leader of the Alan Baylock Jazz Orchestra. In addition, he is "Jazz Composer in Residence" at Shenandoah Conservatory of Shenandoah University, and is the Chief Arranger for the renowned "Airmen of Note" jazz ensemble in Washington, D.C.

Baylock's mastery of the art of jazz arranging and composition expresses itself in his incomparable technique, staggering virtuosity, and an unquenchable desire to challenge and surprise. Along with explosive energy, ingenious re-harmonizations, imaginative melodic, tonal and rhythmic expressions, Alan's creations beam with a sense of joy and soulfulness, and are a glimpse into the depth of the human spirit.

“Alan Baylock has achieved a goal that many artists aspire to, but often fail to reach: he has developed his own distinct sound as a composer. His writing is fresh, and is imbued with a great sense of spirit and fun.”