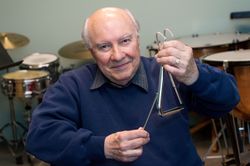 At the age of seven, he started percussion lessons. He studied with Clarence Carlson at the Roy Knapp School and then with Haskell Harr and William Street at the Eastman School of Music from 1947 to 1951, where he earned a performance degree and played part-time with the Rochester Philharmonic Orchestra.

After enlisting and playing in the United States Air Force Band from 1951 to 1953, he performed with the Oklahoma City Symphony from 1953 to 1959. In 1959 he became a member of the Philadelphia Orchestra and remained there until the end of his career in 1997. He was named associate principal percussionist of the orchestra in 1972.

He is widely regarded as one of the most important percussion educators of the second half of the twentieth century, having taught at Temple University beginning in 1972. Along with Temple University, he also taught at Rutgers University and Rowan University. In 1998 he was inducted into the Percussive Arts Society Hall of Fame. In 2012, he was awarded an honorary Doctorate of Music by the New England Conservatory of Music.

Abel's inventions include several unique and ubiquitous triangles and a bass drum stand that allowed the instrument to be suspended with the use of rubber bands.