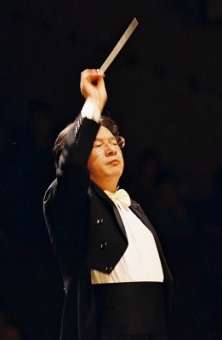 Akira Toda (b. 1951, Aomori Prefecture, Japan) is a Japanese composer, euphoniumist and conductor.

He earned his bachelor's degree of music in euphonium performance from Kunitachi College of Music in 1975. That same year he began his certificate diploma at Tokyo National University of Fine Arts and Music. He studied euphonium with Kiyoshi Oishi and conducting with David Howell. Toda has appeared as a noteworthy euphonium player since he was a student. In 1978 he made his first debut as a conductor, and he has been an active clinician, composer, arranger, and conductor to the present.

Toda has organized Japanese concerts and clinics with James Swearingen, Robert Sheldon, and Frank Bencriscutto. His passion as an educator led him to hold lectures at University of Illinois in December 1994 and April of 1997, where he presented the current state of band education in Japan. His lectures were presented in the November, 1998 Up Date, an American music education bulletin, as well as at a music conference for educators that same year.

His compositional genres are diverse: solo piano, chamber winds, choir, small ensemble and symphonic band. His Procession to Peace was chosen as a required piece for the All Japan Band Competition in 2001 and also in Taiwan in 2005. Toda was honored with a cultural award from his home city, Shichinohe, and is the director of the euphonium tuba ensemble Tubium.

Akira Toda has been conferred a cultural prize by the local government of Shichinohe, Aomori Prefecture on March 13, 2005. Currently, he is the president of the Japan Band Promotion Association, Tokyo Branch.