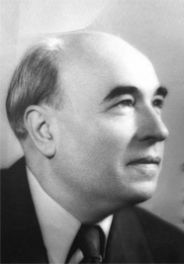 Borgunyó began his musical studies in Sabadell's Escola Municipal de Música (Municipal Music School) under Josep Plans and Cebrià Cabané. He later furthered his studies of composition and harmony in Barcelona under Manuel Burgués. By the age of sixteen he had already mastered a number of instruments and had joined Barcelona’s Municipal Band.

In 1915, at the age of 21, he left for the United States, where he began by writing light music for a dance orchestra, of which he was also a member. Between 1922 and 1929, when he lived in Washington DC, he wrote a great number of ballets, suites and operettas in an American style, which were premiered and which received very favorable reviews in the Washington Times and the Washington Herald, which noted his ability to capture fashionable popular rhythms. It was during this time that he was Artistic Director of the Meyer Davis Orchestra, which was extremely popular in the city in the twenties. In the early thirties, he orchestrated on an exclusive basis for the famous singer Kate Smith, at the Columbia Broadcasting System (CBS) radio station in New York. Next, he produced scores for the city’s World Symphony Orchestra, under the direction of Alfred Wallenstein. The director commissioned him to write works with a Spanish air, which is how they were broadcast by the station.

Between 1941 and 1960 Borgunyó was Musical and Artistic Director of the National Broadcasting Symphony Orchestra under a program sponsored by Firestone. He orchestrated a number of singers, including Mario del Mónaco and Renata Tebaldi. After his return to Catalonia in 1963, he continued to receive commissions for informational documentaries from the U.S. Department of Agriculture until his death in July 1967.

He is composer of an extremely wide range of works, including 150 sardanes and other compositions for the cobla, more than 50 works for voice and piano, and some thirty choral works, most of which are based on the works of poets and other writers from Sabadell; a great number of pieces for piano, two string quartets, a trio and works for string and symphonic orchestras, amongst which we would highlight L'aplec, premiered in 1956 by the Orquestra Municipal de Barcelona under the baton of Eduard Toldrà, Emporion, Nocturno Sevillano, Danza Ibérica núm. 1 and the Suite Ibérica; the three-act operetta Maryana and the ballets La festa de carrer and The Damask Rose.