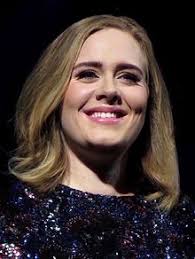 Adele Laurie Blue Adkins (b. 5 May 1988, London, England) is a British singer and song writer.

Adele spent much of her youth in Brockwell Park where she would play the guitar and sing to friends, which she recalled in her 2015 song Million Years Ago. Adele graduated from the BRIT School for Performing Arts & Technology in Croydon in May 2006. She credits the school with nurturing her talent even though, at the time, she was more interested in going into A&R and hoped to launch other people's careers.

Four months after graduation, she published two songs on the fourth issue of the online arts publication PlatformsMagazine.com. She had recorded a three-song demo for a class project and given it to a friend, who posted the demo on Myspace, where it became very successful and led to a phone call from Richard Russell, boss of the music label XL Recordings. Adele's breakthrough song, Hometown Glory, written when she was 16, was released in October 2007.

Her debut album, 19, was released in 2008. An appearance she made on Saturday Night Live in late 2008 boosted her career in the U.S. At the 51st Grammy Awards in 2009, Adele won the awards for Best New Artist and Best Female Pop Vocal Performance.

By 2008, Adele had become the headliner and performed an acoustic set, in which she was supported by Damien Rice. She became the first recipient of the Brit Awards Critics' Choice and was named the number-one predicted breakthrough act of 2008 in an annual BBC poll of music critics, Sound of 2008.

In 2011, 2012, and 2016, Adele was named Artist of the Year by Billboard. At the 2012 and 2016 Ivor Novello Awards, Adele was named Songwriter of the Year by the British Academy of Songwriters, Composers, and Authors. In 2012, she was listed at number five on VH1's 100 Greatest Women in Music. Time Magazine named her one of the most influential people in the world in 2012 and 2016. Her 2016–2017 tour, saw her break attendance records in a number of countries, including the UK, Australia, and the U.S. With sales of more than 120 million records, Adele is one of the world's best-selling music artists.