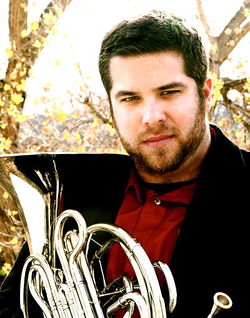 Adam Wolf (B. 1981) is an American hornist, educator and composer.

Wolf an active freelance musician in Los Angeles where he has played with various orchestras, opera companies, and artists all over Southern California, including the Long Beach Symphony, Debut Orchestra, San Diego Opera, The Airborne Toxic Event, Ok Go, Will I Am, and Mike Keneally. He has also recorded for various film and television studios.

Adam is also the founder of the The Rock Horn Project, a rock/classical/pop/jazz/metal fusion ensemble, using the French horn as a solo instrument, with electric guitar and bass, drums, piano and string quartet.

Along with horn playing, Adam is an accomplished classical composer. From wind band to sonata, Adam has written many pieces, most notably Skyward for wind band premiered in Carnegie Hall in 2009 and The Devil Inside for trombone and brass ensemble, premiered by James Miller in 2013.

As a teacher, Adam has taught at numerous middle and high schools around Southern California. He currently runs the brass ensemble at West Ranch High School, and is on staff for the marching band. In addition to West Ranch, Adam is the music designer for the Esperanza High School marching band, teaches privately, and has been on the brass staff at Pacific Crest drum and bugle since 2009. Adam is a graduate of California Institute of the Arts, with a Bachelors in Fine Arts in performance/composition.