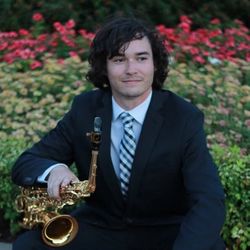 Ad Infinitum is a work for brass choir with percussion taking much of its form and structure from a traditional fanfare style. Drawing inspiration from sci-fi movies, the piece seeks to explore the simultaneous wonder and terror of looking out into space as a new frontier to be explored. The piece progresses from a simple triplet motor while exploring distant harmonies that always tie back to the tonal center of C Major.

The work’s inception was a simple one. As the media announced a presidential plan to implement a military “space force”, I simply got the idea to write a fanfare to serve as the anthem for the interstellar armed forces, thus the original title for the work was Space Force Anthem. As this announcement for the necessity of such a futuristic military operation was wildly unexpected, the harmony of the piece began to take shape. It draws heavily from film music and jazz harmony, employing tritone substitution chords and double chromatic mediants alongside simple secondary dominants to give the chords a harshly distant and unexpected yet sensible harmonic language. The work also explores the different possible timbres and tonal colors within the brass choir, as it passes various lines around chamber ensembles within the larger group throughout the music. The trumpets carry much of the melodic material, with a slower section in the middle to let the horns and solo euphonium take the spotlight for a moment before jumping right back to the triumphant trumpet melody that takes the piece to its conclusion.

This work is dedicated to the brass section of the concert band of Oklahoma State University, and Dr. Tyler Austin, the relentless force behind the success of the ensemble.