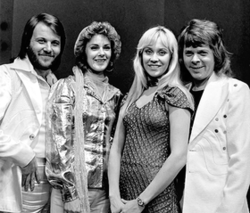 ABBA was a Swedish pop group.

An attempt at combining their talents occurred in April 1970 when the two couples went on holiday together to the island of Cyprus. What started as singing for fun on the beach ended up as an improvised live performance in front of the United Nations soldiers stationed on the island. Andersson and Ulvaeus were at this time recording their first album together, Lycka, which was to be released in September 1970. Fältskog and Lyngstad added backing vocals on several tracks during June, and the idea of their working together saw them launch a stage act on 1 November 1970 in Gothenburg. The cabaret show attracted generally negative reviews, except for the performance of the Andersson and Ulvaeus hit Hej, gamle man ("Hello, Old Man") , a song about an old Salvation Army soldier, became the quartet's first hit. The record was credited to Björn & Benny and reached number-five on the sales charts and number-one on Svensktoppen, staying there for 15 weeks.

It was during 1971 that the four artists began working together more, adding vocals to the others' recordings. Fältskog, Andersson and Ulvaeus toured together in May, while Lyngstad toured on her own. Frequent recording sessions brought the foursome closer together during the summer. ABBA won the Eurovision Song Contest 1974 at The Dome in Brighton, UK, giving Sweden its first triumph in the contest, and are the most successful group to ever take part in the competition.

They became one of the most commercially successful acts in the history of popular music, topping the charts worldwide from 1974 to 1982.

The group disbanded in 1982. They were inducted into the Rock and Roll Hall of Fame in 2010.