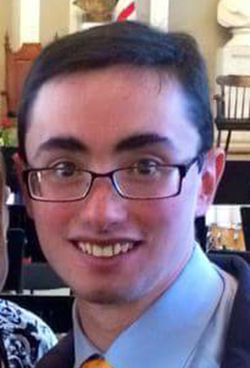 Dr. Friedland’s musical training began with piano lessons and a recital performance of “Tis a gift to be simple,” the Shaker song composed by Joseph Brackett. This performance, in a way, set the tone for his future work, as much of his composition and style revolved around the theme of American music.

Zach attended the University of Rhode Island and graduated magna cum laude with a bachelor's degree in music composition in 2013. During his time at URI Zach was an active member of Kappa Kappa Psi, the National Honorary Band Fraternity. In 2012, Zach made history when he was selected as the nation’s first recipient of Kappa Kappa Psi’s Francis W. McBeth Student Musicianship Award and authored an article for the organization’s national publication, The Podium. Recently, Zach returned to the 2016 Northeast District Convention to lead the All-District Reading Band in several works including his own Mosaic which was commissioned by the Marist College Chapter of the Fraternity. He was also a recipient of the Geoffery Gibbs Scholarship in Music Composition, the James Ladewig Scholarship in Music History, a Kappa Kappa Psi National AEA Scholarship, and a Richard Bureau Hope and Heritage Travel Grant.

Shortly after he moved on to pursue graduate studies at The Longy School of Music of Bard College, finishing his master’s degree in 2015, then his Doctorate of Musical Arts in composition at The Ohio State University, studying with Thomas Wells and conducting with Russel Mikkelson. Composition teachers include Thomas Wells, John Howell Morrison, Jeremy Van Buskirk, Geoffery Gibbs, Eliane Aberdam, Dominique Schafer, and Grammy-nominated composer Joe Parillo. Zach has also studied conducting with Geoffrey McDonald, Gene Pollart, and Mark Conley.

From 2013, Dr. Friedland had been in charge of a summer project, The Rhode Island Recording Ensemble, which he ran with fellow Rhode Island composer and band director, Michael Konnerth. RIRE is a weekend festival held each June dedicated to its mission of promoting the art of new music, fostering the creation of music for the symphonic band genre, giving opportunity to young composers to learn and grow through practical experience and enriching the community of their profession through the collaborative recording experience.

Zach’s symphonic band pieces have been performed and recorded by some of the finest ensembles on the eastern seaboard including The Metropolitan Wind Symphony, The Savannah River Wind Ensemble, and The American Band.