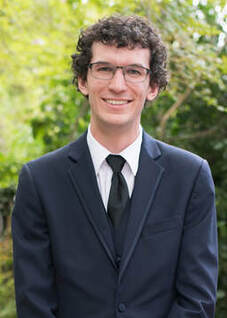 Zachary Bush (b. 1993) is an American student, bassist and composer.

Mr. Bush studied composition with Dr. James M David and bass performance with Dr. Forest Greenough at Colorado State University from 2011-2015. Zachary graduated from CSU in 2015 with degrees in music composition, music performance, and music education. While at CSU, he won two awards in the CSU annual composition contest and received two commissions from CSU’s Middle School Outreach Ensemble. He also played in the Cheyenne Symphony Orchestra for three seasons and in the Fort Collins Wind Symphony for two seasons.

Zachary graduated from Arizona State University in 2018 with a double master's in music composition and music performance. He stayed at ASU to pursue a DMA in composition and expects to graduate in 2020. While at ASU, he has received several commissions from The Harmony Project Phoenix, collaborated with the Biodesign Institute at ASU, and has played as principal bass in local ensembles ProMusica, Musica Nova, Symphony of the Southwest, the Four Seasons Orchestra, section bass in the West Valley Symphony, and freelance bass in local concerts and music theaters.

He won a first-place prize in the 2019 Mykytyn composition competition.