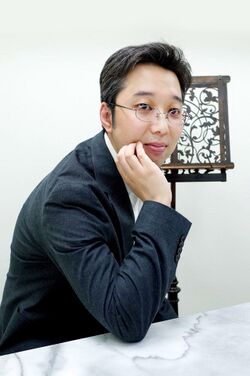 Mr. Nakahashi learned to play in the harmonic orchestra of the Ureshino Town Ureshino Junior High School, "Takeo Municipal Takeo Junior High School" and "Saga Prefectural Takeo Senior High School" trombone, double bass and percussion. He earned both a bachelor’s degree in composition and conducting and a master’s degree from Tokyo College of Music in 2003, with top honors. His teachers have included Mineaki Yoshida, Shin’ichiro Ikebe and Akira Nishimura in composition as well as Yasuhiko Shiozawa for conducting.

He has composed for a wide range of performers, from amateurs to professionals. He won third place for his orchestral music composition in the 71st Music Competition of Japan in 2002. He has received the Academy Award in Composition and Arrangement from the Japan Academic Society of Wind Music and Shimoya Incentive Award from the Japan Band Association for two years in a row.