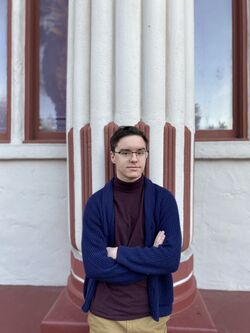 A native of San Jose, California, composer Wyatt Cannon is a graduate of the University of the Pacific under instruction from Andrew Conklin. Cannon is strongly influenced by the natural world and science. His Clade series of pieces, as well as Quicksilver and Reining in Water, focus on how natural processes can be used as inspiration to shape a composition.

Described as a "new rules creator", Mr. Cannon strives to merge existing musical frameworks with an exploratory and forward looking compositional process. He has received a variety of accolades and awards, including being selected for the Pacific Bands Composer Commissioning Award in 2021. A collaboration with University of the Pacific’s Dr. Vu Nguyen, this resulted in the premiere of Cannon's work True Anomaly by Pacific’s Symphonic Wind Ensemble. Previously, in 2018, he won the San Francisco Contemporary Music Players’ composition competition, SF Search, for his piece Quicksilver, scored for flute, vibraphone and cello. He was also the recipient of the CSIC Victor Salvo Music Scholarship in 2017.

Cannon has attended festivals and master classes hosted by University of the Pacific and San Francisco Conservatory of Music, as well as attending Fifth House Ensemble’s Fresh Inc Festival in 2021, where he was commissioned to write a new piece. He also attended the Valencia International Performance Academy & Festival in the summer of 2022. An avid collaborator, he has worked with ensembles such as Friction Quartet, ~Nois saxophone quartet, and 28/78 New Music Ensemble.

In addition to producing a variety of large and small works, Cannon has pushed to secure new music’s place in his community through his involvement with 28/78 New Music Ensemble, Pacific’s local new music group. In his time there as education and outreach coordinator, he has collaborated with ensemble members to create a call for scores, plan a concert featured on The Arc Project New Music’s 2021 Online Festival, and create a variety of outreach events.