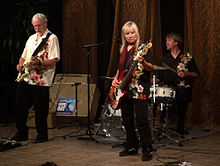 Wipe Out is an instrumental composed by Bob Berryhill, Pat Connolly, Jim Fuller, and Ron Wilson. It is a 12-bar blues first performed and recorded by the Surfaris, who were elevated to international status with the release of the Surfer Joe and Wipe Out single in 1963.

The term "wipe out" refers to a fall from a surfboard, especially one that looks painful.

The song – both the Surfaris's version as well as cover versions – has been featured in over 20 films and television series since 1964, appearing at least once a decade.