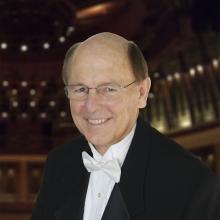 Johnson received his bachelor's degree in music from the Indiana University School of Music and later joined the band staff at The University of Michigan. While at Michigan, he studied conducting with the late Dr. William D. Revelli and the late Elizabeth Green while earning his master's degree in music.

Professor Johnson served as director of bands and coordinator of instrumental music at California Polytechnic State University, San Luis Obispo, for 44 years, and was elected Professor Emeritus upon his retirement in 2012. He then served as the musical director of the San Luis Obispo Wind Orchestra, a group he formed in 1992, and as the president of the World Association for Symphonic Bands and Ensembles (WASBE).

Professor Johnson dedicates much of his retirement time to arranging symphonic works for wind band that have not been previously arranged or transcribed.

Johnson was elected into the American Bandmasters Association in 1984 and served two terms as president of the Western Division of the College Band Directors National Association. Recently the California Band Directors Association presented him with their Lifetime Achievement Award, and he received the Distinguished Service to Music Medal from Kappa Kappa Psi in 2010.